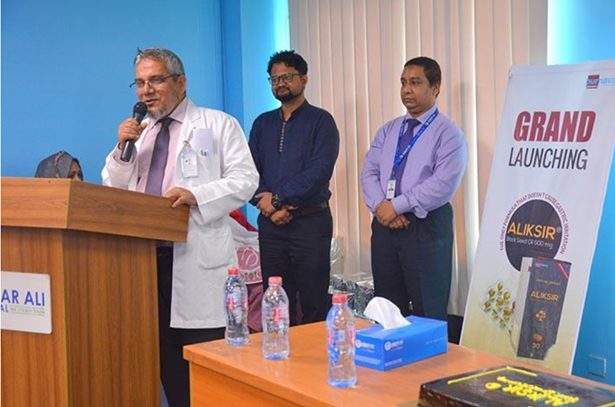 The capsule was officially launched by Chief Executive Officer of the hospital Professor Dr Jabrul SM Haque. Present on the occasion were Rinat Rizvi, Additional Manager Renata Limited and officials of Purnava Limited.

Dr Jabrul SM Haque and Rinat Rizvi both spoke highly of the health benefits of the Black Seed oil.

According to aliksir.com, Black cumin oil, haba sawda in Arabic, is widely known for its virtues. The seeds from this plant have been known since Antiquity. Pharaohs used it abundantly. Black cumin seeds and oil were apparently found in Tutankhamun’s tomb. The Queen Nefertiti is said to have widely used black cumin oil as a cosmetic care. Given its many properties, in Egypt, it is called habat al-baraka, the sacred seed. Black cumin was also widely used in Egyptian cuisine. Pharaohs’ physicians used the seeds as digestive aid as well as a cure against headache, toothache, infections, inflammation, allergies and asthma. Originally from Asia Minor, today it is cultivated in many countries, such as India, Israel, Tunisia and Egypt.

Several research studies have been done about the black cumin properties (mainly on these active components: thymoquinone, dithymoquinone and thymol). There is increasing interest in learning more about its effects on prevention and treatment of different diseases.

Whole or ground black cumin seeds are often used as a spice.

Black cumin oil contains more than a hundred active principles (iron, phosphor, enzymes, carotene, vitamin E, etc.), but notably nigelline (bitter principle, stimulating for the digestive and intestinal systems) as well as nigellone (bronchodilator and with an action similar to an antihistaminic drug).

Additional Manager of Renata Limited Rinat Rizvi said, ‘Black seed oil is highly popular due to its health benefits both from religious and scientific perspective. Unfortunately it has some characteristic side effects (flatulence, heartburn, stomach upset, unpleasant tastes, belching etc.) if it is taken raw. To overcome these unpleasant effects we have developed enteric coated soft gel capsule which is a unique formulation worldwide. To prove the efficacy of this unique brand Aliksir we have run a human clinical trial and it was proven successfully.’

Several specialist doctors of Asgar Ali Hospital were also present at the event. They also spoke about the health benefits of Black Cumin oil. The said it reduces bad cholesterol and increases high-density lipoprotein, helps to control blood pressure, helps to improve joint health, helps to control blood sugar level in diabetes and improves coughing, wheezing and lung function in people with asthma.